Thursday – 90km day. a bright start to the day with another river crossing – 200m ish (630 am start so nice and chilly !). broke free onto the trail at a good pace following the crowd only to discover 200m in we were going the wrong way.

Divert to some more jungle action in the hills cascading throug the rather trecherous terrain. everyones objetive was to get past checkpoint 4 before 4pm or 330 pm or 3pm – noboday seemed to know the cut off time ! got a steady ´pace and dropping into a jog now and again. through checkpoint 1 and 2 with ease then the jungle got more dense to checkpont 3 where quick top up and off again. i was running behind again, but desperate to get through to the next checkpoint as i would be forced to set up with the others and bombederos in the middle of the jungle under armed guard in cased jaguars attacked. everything was going peachy until the heat got the better of me and got a bit delerious stumbling over things. got to the checkpoint and everyone was phaffing about, had to sort my own water out and then other peoples ! then told i had 5 minutes to get out to go on to the next stage !! contemplated staying but then thought …give it a go.

pegged it through still a bit weary then Carlos caught up with me and we trampled through together cussing the jungle, the organisers and everyone else.my legs were giving way so i started to plod, at the same time the ~eau de jaguar was very ripe. so walking like the dwarf in Willow at a fast pace we caught up with Shirley the race organsier as we finally got out of the jungle 3 hours later to checkpoint 5. many defeated looking people feeding up- at this point it was 47km done. my legs were in bits so i decided to take some time out and get in the hammock. Judah did my feet. without going into too much detail, just remember the scene from Aliens when they find the girl and she says ~help me~. thats my feet.

many people have pulled out with infection. rotting; flies are trying to lay eggs in my scratches which is nice. the guy from the foreign legion had rotting where it shouldnt happen…. 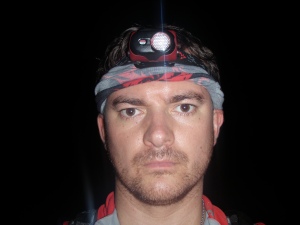 anyway, got in hammock and put feet up for a few hours. woke at 3am and pulled down hammock, got food in order and set off in pitch black – v exciting as you could see eyes in the bushes on the trail with my head tourch. until 11am everything was going fine then the open roads began, then onto the beach in the searing heat. my water ran out and it was 3 hours of blazing heat. but as Tom Hanks said ^^ i just kept runnin ^^, well walking.

got to the finish and in pieces. up early for the final stage, 30km ish and then lunch !then maybe a couple of
beers.

a genuine thanks to all those who have emailed, including mr sandes from SA, any relation ?

it s been a great motivator when i get back to my hammock for some quality Tom time.

cant wait to get back and make some sense of this blog, add photos of my rotting feet and some of the most amazing things Ive seen.

peace and much jungle love