Ok after sending last nights update, people here started dropping like flies. Darren from Boot camp and Mark from pre-run curry, both hydration / exhaustion issues. Then someone collapsed and went into a fit – a total of 5 people got taken away last night to the hospital. Rumour has it a couple are in a coma but we dont seem to be getting any feedback from the camp. 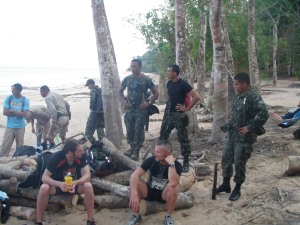 Today was a long day but not as hot which was a welcome relief. Although not a great nights sleep i got second wind today. Only issue is, its going to get harder. Tomorrow is 37km. im not sure if I can complete this event at the moment but we will have to see. My feet have started to blister (photos will reveal all) from the swamps and various rubbing. Was on my own for a bit and heard all sorts going on. Its a strange place and sometimes not filled with the best confidence but everyone is very encouraging despite most people being machines ! i think i was about 87th today out of 130 although I only think there are 95 ish people left in the race. 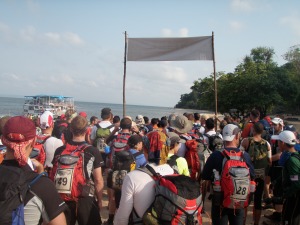 One thing is for definate. I will not be doing anything like this again….in the jungle that is. already talk of the Libyan desert challeneg. There is a South African guy called Ryan Sands who won todays race. He is sponsord by Salamon but to put it quite simply, the guy aint human !

Today my hammock is not near the loo which is quite a relief. For those who saw the 2007 DVD, there was a texan guy called Judah – he is here on the medic team and is a living legend.

Im going to take it easy and see how i get on tomorrow as life is too precious to over do it ! but dont worry mother and wife, I am fighting fit and ready for another day !

Peace to one and all. Um bongo um bongo x